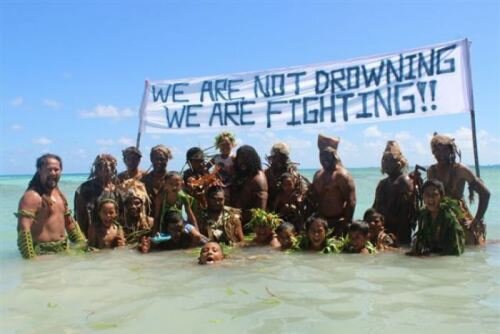 An exciting call for papers from friends and colleagues Kathryn Yusoff, Anja Kanngieser, and Angela Last.

‘Not drowning but fighting: Decolonising the Anthropocene’

We all may be a geophysical force, we may all be geology,
but we don’t matter, are matter and own matter equally.
Despite this realisation, we feel like we’ve been rendered geologically active,
but politically rather passive.
We pass through premature fossilisation in the face of nature’s agency
that we are suddenly able to perceive, apparently through Bruno Latour.
Shouting, flailing, we spew forth a deluge of cultural production
that portrays us as just that: already dead.

While the Anthropocene is embraced as an opportunity to reframe our engagement with the ‘geo’ in geography or even geopolitics, the on-going struggles against the dynamics that gave rise to the phenomenon of the Anthropocene are rarely mentioned. At best, the image of the Anthropocene serves to confirm the excesses of capitalism or is used to fantasise about a complicity of the Earth with socialist ideals of revolution. But mostly, discourse around the Anthropocene extends the experience economy into deep time and the earth’s core through affective engagements. The great Promethean realisation of the (M)anthropocene liberates us from paying attention to the everyday struggles against continued injustices against humans and nonhumans alike. In this session we would like to make present the not-so-present narratives of the Anthropocene in geographical discourse, especially around violence, inequality, white supremacy and on-going colonialism.

What does it mean, to use Aimé Césaire’s words, ‘to inhabit the face of a great disaster’, to witness and participate in its continued (re)production, both inside and outside of academia? What examples of contestation and intervention provoke re-inscription?