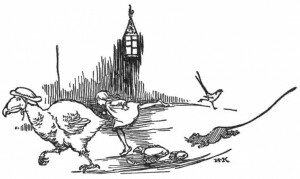 A recent blog post by Sara Ahmed, part of a forthcoming book chapter, raises some provocations relevant to the discussions around vanguardism that emerged in response to Arun Saldanha’s “Some Principles of Geocommunism“, but also for Anthropocene politics more broadly.

Ahmed’s latest project is a repossession and celebration of the willful subject, who is, very briefly, one who is willing to stand out, cause discomfort, ask the hard questions, stubbornly insist on meaningful change. But in “Phenomenology of the vanguard” Ahmed cautions against a kind of willfulness that takes charge, that strides confidently from/at the head: “When those in front assume willfulness, willfulness becomes a front” (para. 4). Willfulness from the front means that others are relegated to being ‘helping hands,’ legs who require leadership from the head, or at worst are deemed “in the way of what is on the way” (para. 1). Instead Ahmed advocates a “working from behind,” and moreover a “working the behind,” with consciously queer and postcolonial resonances. This results in a different kind of politics, one that rather than telling asks, that rather than talking at talks to, “without a message that can be passed simply from one to another, like a baton that we aim to get to the front so we can be in front” (para. 3).

Ahmed is not writing explicitly about environmental politics but I think that her points are particularly relevant to the transformative political aspirations toward which the Anthropocene compels many of us (and besides, we may go so far as to say there’s no division between politics and environmental politics in the Anthropocene). The politics of the Anthropocene concept might be understood as suggesting a ‘working the behind’ of environments and of geological time. There are many practical and conceptual ways that the deep ‘behind’ of nonhuman nature could be (and has been) motivated toward radical environmental politics: both the ‘behind’ in the sense of deep time, and the ‘behind’ in terms of forsaken, recalcitrant, or willful natures – natures that are increasingly ‘in the way’ of business-as-usual. But Ahmed raises perhaps more uncomfortable questions for thinkers of the Anthropocene. Who finds themselves at the head of environmental movements, and who is the behind? How to ‘work the behind’ in hierarchical environmental sciences, uneven interdisciplinary collaborations, or politics that leap toward a radical edge? How does one listen, ask questions, hesitate meaningfully, in a time of both great uncertainty and sometimes overwhelming urgency?

One fairly obvious way might be to find means to work and walk in solidarity and in conversation with those who have persistently worked from behind – for example those who have long resisted slow environmental violence, even by the fact of their survival (Nixon, 2011). Quite differently, perhaps, it might also be to listen however uncomfortably to those who for whatever reason, seem ‘behind the times’ or ‘in the way’ of environmental politics today (though of course some might seem ‘behind the times’ because they are in fact ‘in the front’ in other senses). But these are just my incomplete musings, and however it happens will require work – work to which I can scarcely gesture here.

Many folks have asked whether, in an era of profound environmental crisis, a politics of the behind could possibly be effective, especially if this means hesitating, staying back, listening to dissenting voices (though not necessarily with the aim of reaching consensus). There may simply not be enough time to listen to those who seem too slow, or in the way. Perhaps a geocommunist vanguard, if not a climate dictatorship, is the only way to move quickly and drastically enough.

But I keep wondering, then, if the politics of being ahead determine a new world, then is there really any hope of a world that is any more desirable for ‘the behind’ than one wrecked by environmental change?