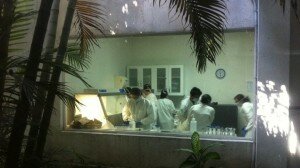 Pepe Romanillos recently drew my attention to HKW’s recent exhibition and project Forensis. Curated by Anselm Franke and Eyal Weizman with ties to the Forensic Architecture project at Goldsmith’s, Forensis explored the growing role of forensics in the making of ‘truth’ and cultural imaginaries. Projects included forensic reconstructions of drone strikes in Pakistan, the failure of NATO ships to assist refugee boats and investigations into resource extraction and environmental degradation. While the exhibit and attendant events have concluded, its products–including this fairly massive tome documenting the collected works–are well worth exploring.

Whereas the twentieth century could be viewed as the “age of the witness”, the current “forensic turn” is inaugurating nothing less than a new cultural imagination. The exhibition excavates the notion of forensis – Latin for things pertaining to the forum – to designate the role of material forensics in articulating new notions of public truth. Its condition is one in which aesthetic practices, new technologies, and architectural research methodologies bear upon the legal implications of political struggle, violent conflict, and climate change. Forensis is based on public presentation and argumentative narrative with the aid of material and spatial objects and structures in the juridical-political sphere. It is about “producing” and “attesting” facts through narrative demonstration.